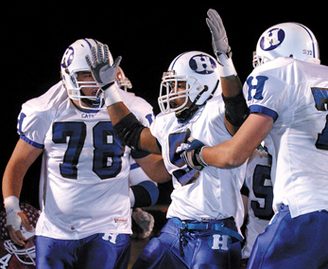 Haywood rolls for 233 yards on the ground


By Steve Blackledge
The Columbus Dispatch

Hilliard Davidson coach Brian White showed a lot of confidence in his offensive line, opting to go for it on fourth down twice last night inside his own 30-yard-line.

Though not known as a gambler, White came up a big winner. One of the fourth downs turned into a long touchdown play in Davidson’s 41-9 upset victory over Westerville South in a Division I regional semifinal at Dublin Coffman.

“It’s smart when you make it I guess, but if we wouldn’t have made those I’d have had a lot people second-guessing me and ready to have my job,” White said.

Quarterback Zack Griffith turned a fourth-and-1 sneak into a 71-yard touchdown run that gave the Wildcats a 19-3 lead.

“That showed the ultimate faith in our line,” Griffith said. “Anything under a yard, I feel 120 percent I can run right up behind my center and guard and make it.”

“I had my head down when I went into the line, I saw a crack and I was gone just like that. Believe me, I was just as surprised as everybody in the stands that it went all the way.”

Tailback Christen Haywood and the defense paved the way for Davidson (11-1), which will face Worthington Kilbourne (10-2) in a regional final Saturday at a site to be determined.

Haywood rushed for 233 yards on 29 carries and five touchdowns to slightly improve on the numbers from Davidson’s 45-35 upset of unbeaten South in a playoff opener last year.

“We thought by watching film that our offensive line was a lot stronger than their defensive line, and it definitely played out that way,” said Haywood, the Central District offensive player of the year.

“We were really clicking on the offense tonight. It was everything we visualized we could do and more.”

White’s game plan didn’t call for Davidson to win by the big play.

“We talked all week about not trying to score TD’s but just getting 3 or 4 yards per carry and moving the chains on them,” he said. “We call it just staying on schedule.”
“I don’t give these guys much credit usually, but I can’t say enough about how impressed I am with how these guys played tonight. That was an unbelievable performance against a very good football team.”

An 80-yard touchdown run by Haywood on a cutback move gave Davidson a 6-3 lead with 3:27 left in the first half.

An errant snap that sailed well over the head of punter Manju Jabbie gave Davidson the ball at South’s 9-yard line, and Haywood scored from the 3.

“That was a huge momentum swing in our favor right there,” White said. “Their usual long snapper was out injured and that underscores why that aspect of the game is very important.” South (10-2), which came in averaging 33.7 points, moved the ball effectively at times, but Davidson continually came up with the key sack, batdown or stop.

Ben Merick and Andy Sena led the defensive effort for Davidson, which has allowed only 83 points all season.

“We wanted this team all along,” Griffith said. “They thought last year was a fluke, but we’re even better this year. I was confident going in tonight, but I never dreamed we’d whip them this bad.
Powered by