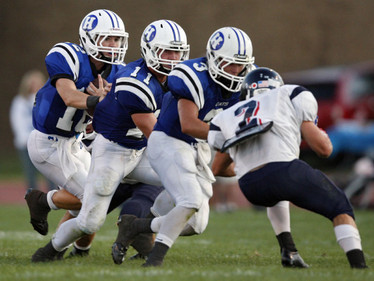 
The Alex Mickley show might have a new co-star.

The senior running back ran for 143 yards and four touchdowns, but E.J. Jennings added 97 yards last night for Hilliard Davidson, which stomped Grove City 28-7 in a season opener.

The Wildcats dominated on both sides of the ball. Their offense repeatedly produced long, methodical drives, totaling close to 300 yards on the ground, and the defense limited Grove City to just 30 yards of total offense.

Davidson’s running game was in full force, coach Brian White said, and the maturation of Jennings will only make it more dangerous. Jennings adds another layer of powerful pop in the backfield and will help feed the near-unstoppable running onslaught.

“E.J. is a good complement,” White said. “He had some mop-up duties for us last year, but he’s getting better. He’s buying into our system.”

But Mickley is still the star. He rushed for more than 1,500 yards last season (with 29 touchdowns) and hasn’t lost a step, wreaking havoc on the Greyhounds defense.

Aside from a 31-yard double-reverse touchdown run on a fourth-and-5 play, most of Mickley’s yards came only a few at a time. Those yards might be even better, he said, because that’s when a defense gets worn down.

Davidson appeared well on its way to pitching a shutout, but one mistake on offense helped end that.

Leading 14-0 and on their first drive of the second half, the Wildcats attempted one of their rare passes just outside the Grove City 20-yard line. The play backfired when an underthrown ball floated into the hands of Greyhounds cornerback Ryan Barbari. The senior returned the ball deep into Davidson territory.

Grove City proceeded to pound the ball in for a touchdown, with running back Connor Lucas scoring from 1 yard out to help tighten the score to 14-7.

“I called a bad play,” White said about the pass. “I stuck my nose in, and that was completely my fault. … Who knows, but we’d like to think we’d have had a shutout if not for that play.”

The Wildcats squashed any Greyhounds comeback hopes by scoring touchdowns on their next two drives.

Senior Jordan Fisher paced the Grove City running game in the early going, but as the score became more lopsided, his carries dwindled. He picked up 23 or his total 39 yards on his first carry of the game.

Quarterback Nick Davis was often pressured in the second half as the Greyhounds tried to rely on their passing game. He completed 6 of 9 passes, but all were for short gains. He ended with just 16 passing yards, but lost much more on broken rushes and sacks.


The Hilliard Davidson High School football team pulled away in the second half for a 28-7 win over visiting Grove City on Friday, Aug. 26, in the opener for both teams.

The Dawgs closed to within 14-7 midway through the third quarter on Connor Lucas' 1-yard touchdown run, which was set up by Ryan Barbari's 72-yard interception return of a pass by Davidson's Brandon Gleim.

Davidson regained command on its next possession, however. With his team facing a fourth-and-5, Tyler Talbott took a pitch from running back Alex Mickley and scored on a 31-yard run with 48 seconds left in the third quarter.

Mickley closed out the scoring with a 2-yard run with 7 minutes, 21 seconds remaining in the game.

Davidson dominated for most of the contest, as it outgained Grove City 306-33. The Wildcats rushed for 294 yards.

"That's Davidson football," Wildcats coach Brian White said. "That's playing great defense. I'd like to see time of possession (35:47-12:13 in favor of Davidson). That's a big key for us to make sure that we have the ball for long periods of time and I felt like it was pretty good."

Mickley rushed for 116 yards and three touchdowns on 21 carries, while E.J. Jennings added 101 yards on 16 carries.

After a scoreless first quarter, the Wildcats opened the scoring on Mickley's 1-yard run with 9:09 left in the second quarter. Davidson extended its advantage to 14-0 on Mickley's 2-yard run with 18 seconds remaining in the half.

The Wildcats appeared headed for a 21-0 lead as they drove to the Grove City 26 before Barbari changed the momentum with his interception.

"I thought our kids played extremely hard," Grove City coach Matt Jordan said. "We had them 14-7 at one point and all of a sudden it became a ball game and we had a shot. It was a big call on fourth down by coach White and his staff running that reverse. They hit it on us and it was just a great call by them."