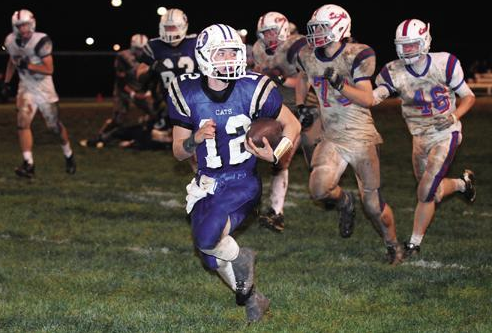 The Hilliard Davidson football program has been the cream of the crop of Central Ohio teams for the last decade or so.

With a pair of Division I state championships in the last six years, some would argue the fact that there's not a better program currently across the entire state of Ohio than the one at Davidson.

With so much success over the years it would be easy for coach Brian White and his coaching staff to look at the Wildcats' 33-0 shutout of Thomas Worthington Friday, Sept. 23, as just another victory and move on to the next opponent.

But Davidson (4-0, 2-0 Ohio Capital Conference Central Division), ranked No. 5 in the latest state poll, didn't get to this point by being satisfied with whether or not it got a win or not, it's more about how it played in that win that matters, and in this case it just didn't cut it, despite the final score.

"We started off well," White said of the win over the Cardinals, "but I thought we lost our focus as the night went on. Too many penalties and a lack of ball security.

"We had some other opportunities that we didn't capitalize on that we will need to later in the season to have a chance to beat our better opponents."

The coach constantly stresses the importance of getting better every day, and he's not sure that happened Sept. 23.

"I think some units and individual players are making strides," he said, "but as a team we may have taken a little step backwards Friday night. More in terms of focus and attention to details than physical play."

In the stat book Davidson appeared to be as dominate as ever.

Defensively, the Wildcats limited the Cards (1-4, 0-2) to just 7 yards of total offense and on offense they were able to churn out big chunks of yards on the ground.

But it was the uncharacteristic turnovers, untimely penalties and lapses in areas like kickoff coverage that had White irritated.

Alex Mickley carried the ball 25 times for 235 yards and three touchdowns and has been solid for the Wildcats. White actually thinks that his talented senior will only get better as the season goes on because he hasn't really played beyond halftime this season.

"Alex isn't the biggest, fastest, or strongest running back we have had here," White said, "but at the same time, he doesn't show any weakness in those areas, either. His feet and balance are what help to set him apart from other backs that we have had. He is equally effective at running inside or out.

"Because of some of the scores in a few of our games over the past couple years, Alex's number of carries and the total quarters he has played, have been limited. As our opponents improve this year, I believe you will see Alex's true value go up as well."

White said he and his team will continue to work hard regardless of who's on the schedule.

"We have been a little inconsistent at times in practice," he said. "But overall, I believe our kids are smart enough to realize the importance of what we are trying to accomplish each week. Our goal is to never get too high or too low at any point during the season. So far, we have been able to complete this objective. Only when true adversity strikes us will we know whether or not we can react to it accordingly."