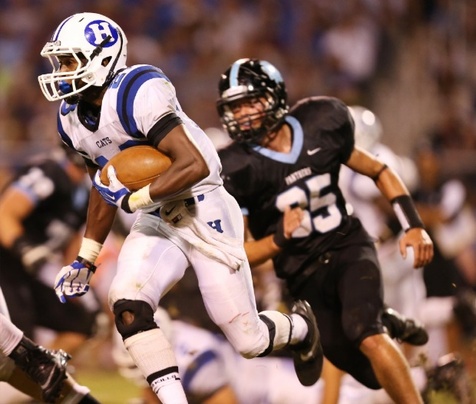 
Any of the 8,000 fans who might have ducked out of Hilliard Darby’s packed stadium last night at halftime would not have believed what they missed upon their return.

With crosstown rivals engaged in a sloppy scoreless tie, Darby seemed poised to take control with a 16-play drive that took up the first nine minutes of the third quarter. But when the Panthers imploded, Hilliard Davidson seized the moment and stole a 21-0 victory to regain bragging rights in the rivalry.

“Momentum is a powerful thing, isn’t it?” Davidson coach Brian White said, shaking his head. “If there are some scientists out there who study this sort of thing, I’d really be interested to hear their explanation.”

When Darby’s pivotal third-quarter drive stalled, the Panthers lined up to attempt a 41-yard field goal. A false-start penalty prompted Darby to instead go for it on fourth-and-8. On a safety blitz, Wildcats defender Markus Bailey whacked the arm of quarterback Nate Green, forcing him to fumble, and Ben Brooks recovered for Davidson.

“We were just trying to get off the field at that point,” linebacker Alex Backenstoe said. “ Davidson always has relied on defense to motivate the team, and we found just the right time to make a big play that ultimately helped decide the fate of the game.”

Davidson, which had managed only four first downs, caught fire. Fullback D.D. Clark ran 42 yards to the 3-yard line, and on the first play of the fourth quarter, he scored from a yard out on fourth down.

After another defensive stand, Wildcats speedster Phillipie Motley took a handoff on a sweep and ran 76 yards down the sideline to score.

“Bailey pinned their linebacker on a great block, and once I got to the edge, their corner was the only guy who had a chance at me, and he was only able to clip my foot,” said Motley, a state-caliber track sprinter and a Pittsburgh recruit as a cornerback.

“We didn’t play well in the first half, but we couldn’t let it get us down,” Motley said. “We came out and played with some passion, and after that defensive stop, things just started going our way.”

Trailing 14-0, Darby — which relied almost solely on the hard running of the 6-foot-3, 225-pound Green — was in catch-up mode, and things did not go well. He was intercepted by Nick Stoll at the 5:16 mark, and later by Parker Foard, who returned the ball 55 yards for the final score with 2:37 left. It was the fourth turnover by the Panthers (1-1).

“We had things going our way, but we got knocked back by some mental errors,” Darby coach John Santagata said. “You can’t make mistakes like that against a team the caliber of Hilliard Davidson. We sustained some drives, but you have to do that until you cross the goal line.”

Darby had 12 first downs to only six for Davidson, but the Wildcats made theirs count.

“I’m not sure if it was breakdowns on our part or what, but they’ve got some pretty good athletes who are blessed with a lot of speed,” Santagata said. “We were able to hold them down most of the game, but things really turned there in the fourth quarter.”