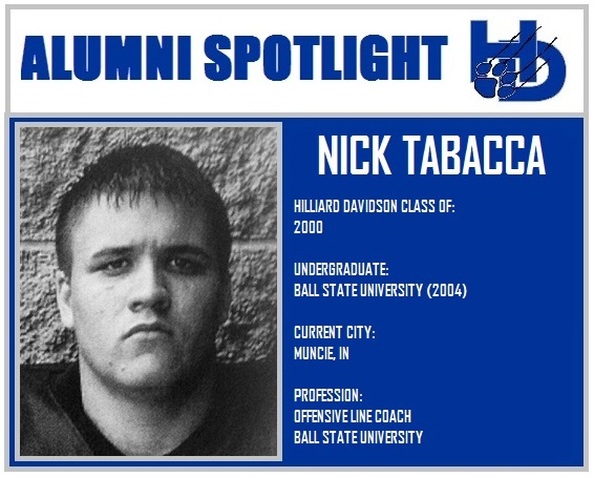 Q.       You are entering your second season as the offensive line coach at your alma mater. How does it feel to be back and coaching at Ball State?

A.       It’s been great to be back at Ball State.  There’s definitely something special about coaching at your alma mater.  It’s really felt like coming home.  There are a ton of familiar faces that it has been fun to reconnect with as well.  I take a ton of pride in Ball State football.  I never stopped checking scores while I was away.  Now it’s nice to know that I’m directly contributing to how those scores end up!

Q.       The 2013 season will be just your 7th year of coaching and you have climbed the ladder rather fast. You began as a graduate assistant at Ball State, before moving on to DIII Defiance, then Butler, and now DI Ball State.  What has been your recipe for advancing through the coaching ranks so quickly?

A.       I don’t believe that there is a recipe.  I’ve been extremely lucky to work for and learn from great people and coaches everywhere I’ve been.  The best advice that I’ve received as a coach is to never worry about the next job.  Do your best at the place you’re at, because that program and those kids you’re coaching deserve that.  It’s been a lot of fun.

Q.       Now that you have your first FBS season as a coach under your belt, what has been your biggest hurdle?

A.       Probably the biggest difference between Ball State and some of the other places I’ve coached is how year round the recruiting calendar is.  Every year it seems to get earlier and earlier that we are trying to identify and begin recruiting high school players.  It’s definitely a year long process, but no matter where you are coaching, at the end of the day, recruiting is about relationships and organization.  That part hasn’t changed.

Q.       Who or what was your inspiration to go into coaching and if you were not coaching football what could you see yourself doing?

A.       Well first I’d have to say my Dad.  He wasn’t a coach, but he instilled in me early on a love of athletics.  To this day both my parents are among my biggest supporters.  After that I’d have to say two coaches:  Brady Hoke and Ted Huber.  Coach Hoke was the head coach at Ball State my final two years playing and my two years as a G.A.  It was really apparent that he had a passion for the game of football, and he passed that on to his players.  He really cared about his players.  Finally Coach Huber was my offensive line coach.  He’s retired now, but he exemplified toughness every single day.

If not coaching I don’t know what else I would do.  Probably try to own my own business, but I hopefully I don’t ever have to find out!

Q.       You were a team captain, earned four letters and started 33 games on the offensive line at Ball State from 2001-2004, but what impresses me the most is the fact that you were named to the Academic All-Mid American Conference team in 2002 and 2003.  How were you able to balance the two well enough to succeed in both school and football at a rather high level?

A.       I think that academics were always a priority in my life, and that starts with the foundation that my parents built in both me, and my siblings.  When something is a priority you are going to make time for it.  A college football player’s life is hectic and busy, but there is plenty of time to be successful at both.  The final thing was that I enjoyed school.  I studied history as an undergrad, which I genuinely enjoy.  It makes it easier to put the work into something if you enjoy what you’re doing.

Q.       Your father, Jerry, and brother, Chris, both played football at Ohio State. Rather than follow their path, you created your own to Ball State. Who were your top schools during the recruiting process and why did you choose to go to school in Muncie, Indiana?

A.       Recruiting has changed a lot since I was coming out of Hilliard Davidson.  I was mostly being recruited by MAC schools.  I really clicked with the coaching staff at Ball State.  I liked the campus.  I wasn’t a highly recruited player.  The main reason that I chose Ball State over Ohio State or any other BCS level school is because the BCS schools didn’t recruit me except as a walk on.  I’m glad things worked out the way they did.  Ball State was definitely the right place for me.

Q.       In high school you had the unique opportunity to play for Coach John Sines and Coach Brian White. What did you take from them heading into college?

A.       I learned a lot from both Coach Sines and Coach White.  They are both excellent coaches.  Coach Sines was an intense coach, and if you didn’t do the little things right he could definitely get on you.  I guess it taught me the importance of doing the small details right.  Back then I did them right because I didn’t want to get my butt chewed.  As a coach I still appreciate that lesson, and I appreciate the fact that Coach Sines was such a stickler for the details.  Coach White taught me a lot as well.  He taught me about toughness, which is a lesson that every football player needs to learn.  Coach White understood how to push us further than we thought we could go.  That’s what builds toughness.

Q.       What is your favorite Hilliard football memory?

A.       Wow, there were a lot of good ones.  Probably my favorite is our junior year beating Worthington Kilbourne at their place.  I’m not sure what our records were, but we were both playing well at the time.  We won the game in a physical game where we ran the ball pretty well.  I’ll never forget that locker room.  We were on cloud nine.  It was a great feeling to be in the locker room celebrating with teammates.

Q.       How often do you make the two and a half hour drive back to Hilliard? I assume you are responsible for recruiting in the Columbus area, but do you still have family here?

A.       I actually do not recruit central Ohio.  I have at other schools I worked at.  I still come home as often as I can to see my family.  I have a sister and a brother (Hilliard football alum as well) who live in the central Ohio area.  My parents still live in the same house I grew up in.  I’m married with four kids now, so we’re always coming back so they can see Grandma and Grandpa.  It’s great to get back and visit.


Q.       If you could give any advice to the current Hilliard Davidson team what would it be?

A.       The best advice I can give is to listen to Coach White!  He’s a phenomenal coach and a better person.  He has an unbelievable staff that works their butts off for Hilliard Davidson football.  As an alum, I couldn’t be prouder of how Hilliard Davidson plays football:  tough, disciplined, and tenacious.  Keep it going! 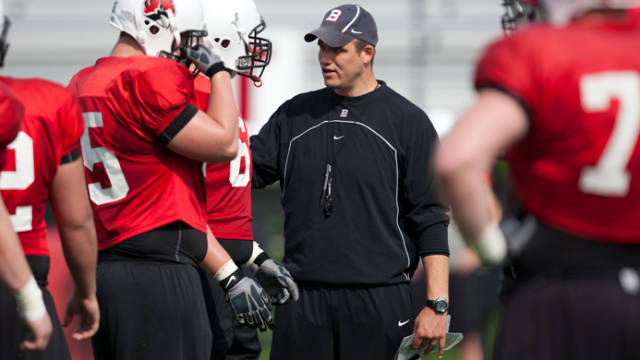