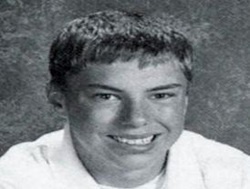 Family, friends, teammates and classmates of 16-year-old Arthur “Art” Lee Lane overflowed the sanctuary of Cypress Wesleyan Church Monday, Dec. 7, to celebrate the life of the Hilliard Davidson High School sophomore killed Friday, Dec. 4, when he was struck by a train.

“Just saying his name brings a smile to my face,” said one of his four friends during the Dec. 7 service. The four boys took turns describing their friendship and tales of minor mischief.

“He was my best friend and always will be,” said another friend, who told about Lane using an air horn to startle unsuspecting people.

Another friend recalled a time Lane and his friends got sunburned on their first day on a Florida beach, making the remainder of the trip a little uncomfortable.

“I loved him ... he was like a brother to me,” another friend said. “It was an honor and a blessing to know him.”

Hundreds of students attended the vigil in the parking lot of Davidson High School and many others walked to the grade crossing at Davidson Road, several hundreds yards away, and left flowers and lighted candles.

Several bouquets of flowers, a teddy bear, and candles remained Saturday morning among the rocks and cinders next to the rails.

Lane was an only child whose father died in 2001. His mother, Tina Elramly, and her husband, Khaled Elramly, three grandparents, a great-grandmother, and aunts, uncles and cousins survive him.

Lane, who was born in Washington, resided in North Carolina until 1999. He resided with his family on Brisum Way, south of Roberts Road and west of Walcutt Road.

“He was a happy-go-lucky kid,” said family friend Brad Himmeger.

Lane played football for the Hilliard Davidson Wildcats, but injured his foot early in the season and could not return to play the rest of the year. He also played lacrosse and sang in the school choir.

“Art taped video games during the season, though, and did others things to help (head Wildcats football) coach (Brian) White,” Himmeger said.

Players honored Lane, along with two Dublin students killed in a Nov. 28 car accident, with helmet markers. Kyle Colello, 18, played for the Dublin Scioto Irish, and 15-year-old Lyndsey Rice, was a cheerleader.

White said he believed in two tenants: Good things happen to good people, and everything happens for a reason.

“We might not know that reason now, but there is a reason ... and Art is in heaven ... and in a better place,” White said.

White spoke about the strength and selflessness of Art’s mother, who when first speaking to White Dec. 4, showed concern that the death could affect the team in its championship match-up the following day.

“I can’t think of a better example of strength and selflessness,” White told the Wildcat players attending the memorial.

Playing football was just one of the athletic activities Lane enjoyed.

“Art was a sports buff,” whose favorite team was the Duke Blue Devils basketball team.

He liked basketball, Himmeger said before the service, and particularly playing lacrosse.

Himmeger described Lane as a “go-to kid” for his friends.

“He’d be the one to go up to a girl and break the ice for someone else,” Himmeger said, likening Art to the iconic child, “Mikey” from classic Life cereal commercials.

“Art would be the one to kind of try things out for other kids,” he said.

Additional counselors were available Monday at Davidson, said Carrie Bartunek, a spokeswoman for the district.

“Some kids went to talk (to the counselor), but I think most of our students had the weekend to talk with their friends and own family about it. ... Things went smoothly (Monday morning),” Bartunek said.

Lane’s maternal grandmother, Sue Harper, shared stories about her grandson at the memorial.

She spoke about the family joining together on Thanksgiving, Nov. 25, the day of Lane’s 16th birthday.

Lane also loved watching movies. He and his grandmother went to see The Blind Side.

Students attending the memorial wrote messages to Lane on the borders of three matted 8-by-10 pictures. One of those showed Lane, smiling behind the wheel of a car.

Another was Lane and his mother at a Buckeyes game.

Lane was her eldest grandson, and she recounted how she learned of his birth, and then of his death, and cried both times.

“But in 16 years, I had many opportunities to laugh with Art,” said Harper, who shared several family stories.

Lane was struck and killed by a southbound train while walking south, between the rails, at about 3:15 p.m. Dec. 4.

Lane was walking from Davidson High School to the Hilliard branch of the Columbus Metropolitan Library to meet his mother, Hilliard Det. Dave Cunningham said.

“Lane was wearing headphones and a ‘hoodie’ covering his head, Cunningham said.

Norwich medics responded to the scene and pronounced Lane dead at the scene.

“(Lane) was a young man who made life full and made life fun,” said the Rev. Rick Rucker, a youth pastor at Cypress Wesleyan Church.

Memorial contributions in Lane’s name may be made to the Touchdown Club at Davidson High School, 5100 Davidson Road, Hilliard, 43026.
Powered by