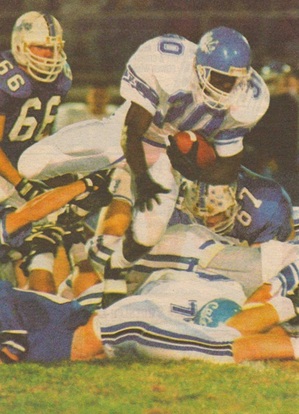 Hilliard has caused a stir by defeating six straight opponents to come within one win of an Ohio Capital Conference Ohio Division football championship.

Record-setting running back Durance Mitchell and seven teammates quietly have a grip on another opponent: asthma

Until the advent of inhalers that quickly deliver medicine to the lungs, the respiratory problem kept many would-be athletes from aerobic sports activities.

“When I first started playing football and running track, the asthma did bother me and did discourage me,” Mitchell said. “I couldn’t do all the conditioning the others did. Things turned around when I got better medication in seventh grade.”

“Now I don’t worry about it. I pretty much know my limits. After a long run I know I’ll be messed up, so you get your inhaler.”

Mitchell has set school records for rushing yards in a season (1,455) and in one game (279) and has scored 16 touchdowns.

Hilliard trainer Pam Fugitt and coach John Sines keep close tabs on Mitchell and the other asthmatics, especially when the weather is extremely hot or cold. They must drink plenty of fluids so their throats don’t get dry.

“We mostly worry during practices when doing extra heavy work or sprints,” Fugitt said. “We have players who use the inhaler 15 minutes before practice as a preventive measure or during games if there’s an attack.”

Mitchell had a severe attack in August 1995 during two-a-day practices. An emergency squad was called and he was hospitalized so his heart could be monitored. Although Mitchell had taken his medication that day, he hadn’t been doing it consistently enough.

“That episode made everybody more aware. He was in trouble,” Sines said. “I think he learned a lesson, that as long as he takes care of it, it won’t become an issue.”
Powered by