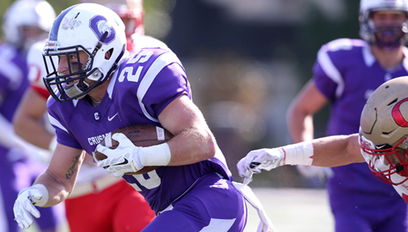 For some of the Davidson faithful that have been to a Capital game this season, some might have had to double-take thinking Thom Hausler (’02, Hilliard Davidson/Capital) was back in Bexley returning kicks for Capital University. They would be mistaken as another Davidson alumni, Nick Waters (KR/SB, Jr.) is returning kicks for the 2015 Crusaders. Not since Hausler has Capital (2-6, 2-5) has such a prolific return man.

Waters is the Crusaders lead return man on special teams, returning the ball 30 times for 562 yards, the most since Hausler returned 30 kicks for 649 yards and one touchdown in 2004. Waters has also started 7 of 8 games in the offensive backfield, carrying the ball 54 times for 284 yards and two touchdowns. With 26 yards on 3 receptions Waters is approaching to 1,000 yard mark on all-purpose yards (871 all-purpose yards).

Waters hasn’t been the only special teams contributor for Capital this season. Jack Johns (K, So.), a transfer from Findlay, has been the main kicker for the Crusaders this season. Johns has connected on 5 of 7 field goals attempts, hit 20 of 22 extra point attempts, and kicked off 33 times for 1738 yards and 4 touchbacks.

Under center for the Crusaders has been Nick Iske (Capital, QB, So.). Iske has started all 8 games for Capital and has completed 41 of 67 passes, two of which went for touchdowns,  and has not thrown an interception all season. He has also rushed for 233 yards and 2 touchdowns on 71 carries.

On defense Jimmy Curtis (Capital, FS, Jr.) has picked up where he left off from his 2014 All-Conference season. In 7 games Curtis has tallied 39 tackles (17 solo), 5 pass break-up’s and 2.5 tackles for loss.

​Others contributing for the Crusaders has been Nick Wright (NG, Jr.) and Brett Annis (DE, So.). On the season Wright has 13 tackles, including 2.5 for loss, while Annis has 9 total tackles. Both have started multiple games for Capital on the defensive line.
Powered by