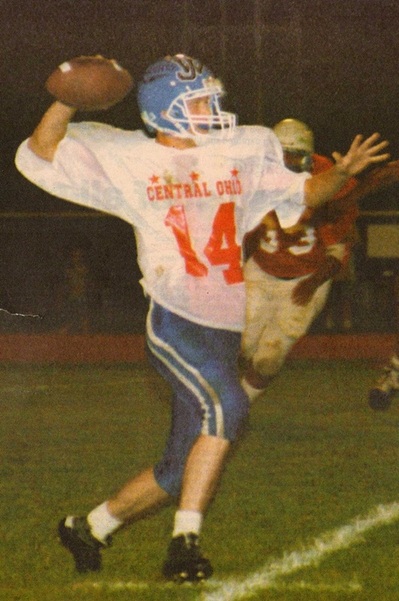 
When Hilliard High School graduate Cliff Rece showed up at his first practice for the SportsMedicine Grant Central Ohio All-Star Football Game, he saw a lot of familiar faces.


However, after the game last Friday at Upper Arlington’s Memorial Stadium, those players may always remember Rece. The former Wildcat quarterback led the Gray to a come-from-behind 17-7 victory over the Scarlet in a wild game which had three power outages delay play for a total of 30 minutes.


“It was fun,” said Rece, whose all-around strong numbers of 91 yards passing and 46 yards rushing earned him Most Valuable Player honors for the Gray team. “It was great to play with guys you are used to going against.”


“There was a lot of talent. There were some big boys out there. It was intimidating at the first practice when I looked around and saw everyone.”


He was joined on the squad by Hilliard’s Erich Hopkins, who suited up on the defensive line one last time in a Wildcat helmet. He led the Gray defense with five tackles.


The Gray appeared to be intimidated early as it fell behind 7-0. The touchdown came when Scarlet quarterback Bill Owen, a Westerville South graduate, brought back memories of the Wildcats’ banner season last fall, when he found Koreh Lavelle, his favorite target last year, running wide open across the middle of the field. He laid in the pass perfectly to Lavelle, who broke one tackle and sprinted the last 20 yards for the game’s first score with 8 minutes, 18 seconds left in the first period.


Amanda-Clearcreek’s Scott Crites kicked the extra point to give Scarlet a 7-0 advantage. However, the squad never scored again.


Penalties took the team out of every drive it seemed to get going. On the night, Scarlet was flagged 11 times for 98 yards.


“We had too many penalties,” Pentello said. “Every time I would look it seemed like we were going backwards. It is hard to get going when you are doing that.”


And after a while, the Gray squad finally did get going – especially in the second half. Watterson’s Mike Pulsfort kicked a 27-yard field goal in the second quarter for the Gray to cut its deficit to 7-3 at the intermission. But in the third quarter, Rece engineered a 13-play, 99 yard drive, capped by West Jefferson’s Tony Amann’s going over the top for a 1-yard plunge. On the drive, Rece completed both of his passes, including a 51-yard bomb to West’s Shawn Estepp.


Late in the contest, DeSales quarterback Matt D’Orazio rolled out for the Gray and found Upper Arlington’s Brent Martin for a 7-yard touchdown that capped the scoring and a weird night of football.


The Gray ended the night with 329 totally yards, of which 213 came after halftime. Rece’s totals led the Gray quarterbacks, while his rushing total was second to Whitehall’s Murad Holliday, who had a game-high 69 yards.


“We knew they couldn’t handle our line the whole game,” Rece said. “Our offensive line was the game. They went out and did the job. If they wouldn’t have it would have stayed 7-3, but they were great.”


“It was fun. There was a lot of talent out there. It was a strange game. You had to keep your poise, but it was still a lot of fun.”