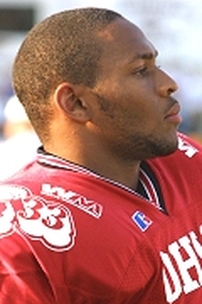 West Virginia might have inked Ohio’s best skill player in the Big 33 Classic, one who has a little Amos, a little Avon and a lot of Quincy.

Hilliard Davidson’s Erick Phillips, shuffled to fullback as Ohio head coach Jack White tried to maximize backfield speed, showed why he was SuperPrep’s Ohio Player of the Year by mixing solid moves, good speed and a love of contact and straight-ahead running. Phillips carried six times, second only to Bowling Green recruit P.J. Pope, the starting tailback, and did it in an array of ways, running through, under and, occasionally, around a defender. “My main focus here was to show that I wasn’t just a north-south guy,” Phillips said. “I can run east-west and make some moves. I also wanted to stick in there and show that I can hit, too.”

He never lost a yard and routinely gained yards after the hit by keeping his powerful, thick legs churning. His low center of gravity and exceptional timed speed allows him to play a power-finesse game.

Phillips is trying to better his conditioning and come to WVU’s fall camp ready to compete for playing time. He’ll have a logjam of players in front of him, including three-time 1,000 yard rusher Avon Cobourne and the player WVU recruiting coordinator Herb Hand says he most resembles, Quincy Wilson.

“Phillips is built like Wilson: shorter, compact and strong,” Hand said. “He’s a great talent, and a lot of people were surprised we could get him.”

The All-Ohio first-teamer chose West Virginia over Michigan, Penn State and Indiana, and his power could get on time on special teams if WVU does not redshirt him. He threw a solid, clean under-cut block on Pennsylvania punt return team player while manning the up-back slot.

Phillips, whose high school coach, Brian White, was an Ohio assistant, rushed for 1,845 yards and 21 touchdowns last year. He was named all-Ohio first team in Division I, the state’s largest class. Hilliard finished 12-1, losing in the regional finals.

“He has everything you look for,” White said. “He can run inside and outside, and catches the ball really well. It rarely gets to his body.”

“That probably wasn’t the best use of his talents,” White said.

Still, Phillips’ ability stands out. He was one of a handful of stud players who one could tell likely had the talent and heart to play immediately in college.

“I’ll come in ready to go,” Phillips said of reporting Aug. 4, with WVU’s other incoming freshmen. “I have been in Morgantown the past few weeks, and only came back to play in this game. I’ll spend some