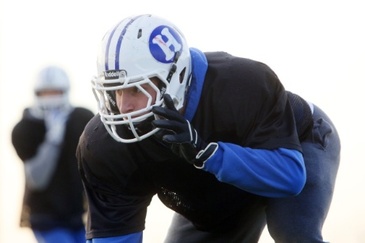 
As a rule, the quarterback and running back are the centerpieces of a high-school football team. Often regarded as the school’s best athletes, they get the statistics and the headlines.

Undefeated Hilliard Davidson has a hierarchy all its own, and Leo is the main man. Leo is a term for the featured hybrid defensive end/outside linebacker. The role demands the physicality, leverage, quickness and explosiveness to outmaneuver tight ends and wreak havoc on opposing quarterbacks and running backs.

Anointed as the latest Leo in 2012, senior Alex Backenstoe is the main cog of a Davidson defense allowing just 8.9 points per game entering a Division I regional semifinal against Huber Heights Wayne (11-1) tonight at Upper Arlington.

The Central District defensive player of the year in Division I, Backenstoe has 13 sacks and 21 tackles for loss. Dominant in playoff victories over Miamisburg and Pickerington North, the 6-foot-1, 235-pounder will be called on to harass highly touted Wayne quarterback D’Mitrik Trice, who has passed for 2,970 yards and 36 touchdowns.

“In my younger years, I was an offensive lineman, then I played linebacker and fullback as a freshman,” Backenstoe said. “Before my sophomore year, Coach (Brian) White called me in and told me to start working with the defensive ends and tight ends. I’m not sure what it was, but he must have seen something in me he liked.”

White said he looks for certain qualities in his Leo, and that player usually doubles as a tight end and serves as a blocker in Davidson’s run-based triple-option.

“When we learned this defense and put it in, we discovered that the Leo was the ideal spot to put your best defensive player and, with the exception of maybe one or two years when we had a dominating middle linebacker, it has always worked out that way,” White said. “Alex is the latest in a line of really good ones.”

Backenstoe inherited a position that Tyler Backstrom, Keith Heitzman and Sam Coles filled adeptly before him. Heitzman is a starter for Michigan.

“It’s a prestigious job to hold, but there’s a lot of pressure that comes with it,” Backenstoe said. “All those guys before me won state honors, and I knew I had big shoes to fill.”

It is no coincidence that the past four Leos have worn jersey No. 2.

“Earning that No. 2 is a big motivation for everybody because, not only is it the most important position in our defense, an expectation of leadership comes with it,” Backenstoe said.

White’s case for Backenstoe being the team’s most valuable player encompasses the role he plays on offense. Although he has only two receptions in two seasons at tight end, Backenstoe is regarded as a vital and dynamic blocker.

“He’s at the point of attack

90 percent of the time,” White said. “When you talk to people who scout us, they recognize we usually go where No. 2 goes, and there’s a reason for that.”

Because of his lack of size, Backenstoe is getting attention from only a handful of Division II and III programs, mostly as a linebacker.

“Unfortunately, Alex doesn’t have recruitable size like (Heitzman), so we won’t get to watch him on TV,” White said, “but I can tell you for a fact that Alex Backenstoe is making just as many big plays as anybody who’s ever played on the defensive side of the ball for us.”