‘Mac' Reflects On His 34 Years At Hilliard High School 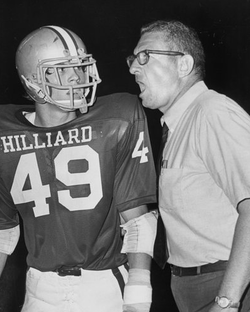 When Norm McElheny, who will retire March 1, after 34 years with the Hilliard City School District, arrived in the village in the fall of 1950 to take his position as assistant football and basketball coach, and head baseball coach, the newest street in town was Hamilton Rd.

“Mac” and his young bride soon settled into a little house near the fair-grounds. The young football star and Heidelberg graduate had been persuaded to come to Hilliard by Superintendent M.D. Hartsook, who traveled throughout the state, on recruiting missions for the school. Mac remembers him as “low key and very effective.”

He must have considered McElheny a real catch.

“Mac” had started playing football as a high school sophomore in Tiffin and went on to OSU where he played on the Big Ten Championship team in 1944, receiving a varsity letter as a freshman tackle, before serving two years in the United States Navy.

Following his military service, he played football four years at Heidelberg College where he obtained his bachelor’s degree in 1950. There he was named to the All Ohio Conference Football Team.

“I was never on anything but a winning team and I just liked the feeling,” said Mac recently responding to a question on why he went into coaching. One of the factors in his decision to take the Hilliard job was that he would be assistant to Coach Everett Farenholz who was in the process of obtaining his law degree and planning to leave at the end of the year, placing his assistant in line for the head coaching position.

In 1962 Mac was named “Central Ohio Coach of the Year,” an honor co-sponsored by the Citizen-Journal and the Union Company.

Mac well proved his ability in shaping a excellent football team year after year. “Farenholz (who incidentally, is the son-in-law of Mr. and Mrs. Paul Miller and now a district attorney) left a good nucleus,” Mac recalls, “and my job was to sell more kids on football.”

Which was not too difficult to do in those days of few extra curricular activities. Another thing, not generally realized, Mac said, is that Hilliard, even as a small village, served a very large school district- with a much greater area than the district currently has.

At the time all of Prairie, Brown, and Norwich Townships sent their students to Hilliard, and many residents of Perry Township were given their choice of attending school in Hilliard. Many students came from across the river, from the Henderson, Reed, and Zollinger Rd. areas, and he recalls the pep assembly cheers for the “Romans and the River Rats.”

Mac arrived in town just in time to see the stadium built in 1951, with the help of the first Boosters’ club. “I’m probably the oldest active Booster,” he laughs. In 1969 the structure was razed after it was declared unsafe and the Boosters, now a strong organization, again rallied to rebuild it with three times the seating capacity, a new press box, and other improvements.

A coach of Mac’s caliber has not been without attractive outside offers through the years, but he said he and his wife, Joan, who later became a teacher in the district and is now District Reading Coordinator, among other administrative duties, decided very clearly that “we really liked this community.”

“We’ve never regretted staying,” he said. In addition to their school duties, the McElheny’s, parents of three grown sons, all in business, are church members and active in the community.

In the days when all teachers and coaches had to supplement their incomes through summer work, Mac also recalls Hilliard was “a good place for summer employment…” Some of his summer jobs were with Leo Shade, at Hilliard lumber, and with Mart Boerner, the plumber. Mac is also pleased to recall that he was trusted for a loan by banker Chris O’Brien.

One of Mac’s areas of expertise is in business and throughout the years, up until his retirement, he has taught a variety of business courses at the High School. His master’s degree was obtained from OSU in 1965.

“I’m tremendously proud of the good citizens they have become,” he said, explaining that they may be found pursuing successful careers in all walks of life. A former Hilliard football player, for example, is president of General Motors in Canada. Another is an outstanding Columbus gynecologist, and the list could go on and on.

The saddest of Mac’s memories are of football players who met premature deaths. Pulling from his file the photo of a young player in uniform, he comments on the death of Rick Hausman, an outstanding football player on one of his most outstanding teams, who went to OSU and was later killed in Vietnam.

Mac’s retirement plans were not fully formulated last week, but he is sure to be doing some of the things he never had time for in his busy career which left very few leisure hours. 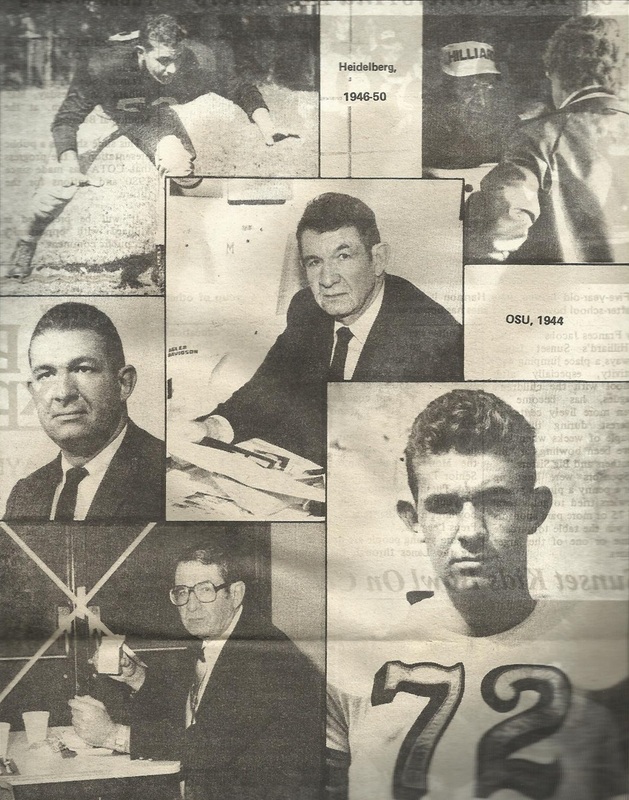 In honor of retiring, Athletic Director Norm McElheny, who for 21 years was head football coach at Hilliard High School (1951-72) , the News last week decided to contact some of his former players to find out “what kind of coach” he really was.

From the hundreds who could have been selected, only a few former players were called, and they were chosen by a method no more scientific than who happened to be home when the telephone rang after a few likely names of former football players were picked.

But even in this small random sampling, there emerged a crystal clear picture of “Mac the Coach,” and the News learned that he is a man who has had a lasting influence in the lives of his students.

“He was tough, but very fair… He taught us a lot and a great many of those principles I still use in business today. He impressed upon me a responsibility to kids, through his extra dedication and helpfulness to students, which I came to appreciate fully as a coach on his staff and later as a member of the Hilliard School Board. He helped tons of us get scholarships… A great, great man who had the most positive effect on me of anyone I ever came in contact with.”

“A man who has had a lot of influence on Hilliard and athletes… Mac was the kind of guy who took charge. He used to tell us, ‘Well, you can give back all those rings, now, because you’re going steady with me this season’… but his interest in his players did not end with the ball season. He helped me and hundreds of others get into college. Mac was a coach who was strict and demanding of your time, but who commanded a lot of respect from us.”

PETE MILLER - Hilliard businessman, who as a student set the national record in discus throwing.

“Mac always got the point across… He was a disciplinarian and made you think about your actions. I saw a lot of personal development under Mac.”

“A disciplinarian… he wasn’t afraid to tell us when we were doing something wrong. He used to tell me my grandmother could get past me. He was ‘hard but fair…’ That man had a significant impact upon my life. He helped me get a scholarship. I may not have even gone to college, but he got me a free education and I went on to get my master’s.”

“Practices were long and hard. He was a little like Woody, but it paid off when we got to the games. He taught us self discipline. He was ‘a disciplinarian but very fair.’”

“A role-model…. Very supportive… imparted a sense of urgency in doing the best, without compromise. I learned a great deal about being a team player and working with people. I never forgot him. Some of the principles he taught became part of the basic foundation which saw me through some very rough times during 12 years in the Marine Corps.”

MR. & MRS. JERRY BAUM - Hilliard businessman and longtime Booster who has not missed a football game, either at home or away, in 31 years. Mrs. Baum had Mac for business courses.

“I played football and ran track for Mac in the mid-50’s. He is the fairest person I ever knew. He had discipline, but was very fair and didn’t favor anybody. He was an excellent teacher. He demanded you to learn and everyone liked him. He got our son Craig, now a Coach at Whitehall, a scholarship to Heidelberg. Probably has the soundest athletic budget around… Tight with the nickel, but gets things done.”
Powered by