Wildcats get their kicks against UA 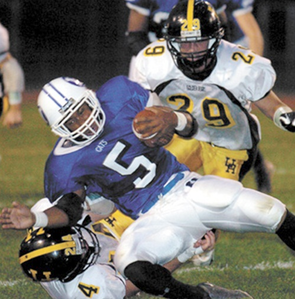 By Brad Emerine
This Week Newspapers

Christen Haywood rushed for 234 yards and three touchdowns and Hilliard Davidson allowed just six first downs until the final two minutes, but it was the kicking game that turned things in the Wildcats’ favor in a 38-12 win over Upper Arlington last night.

Trailing 6-0 after Upper Arlington running back Braedon Dennis scored on an 8-yard run, Davidson punted from its own 46-yard line. Chris Miller’s 53-yard punt was downed at the UA 1 by center Don Curtis. Two plays later, Wildcats defensive back Nick Massie intercepted a pass by sophomore quarterback Robert Anderson and returned it 15 yards for a touchdown.

Nick Vaccari, who later kicked a 27-yard field goal, made the first of his five extra points as Davidson (4-1) took a 7-6 lead.

“Our special teams played great tonight and Curtis’ hustle to get down and stop that punt at their 1 was huge,” Davidson coach Brian White said. “That enabled us to get the momentum back and we were fortunate they never recovered.”

In all, the Golden Bears (2-3) started nine of 13 possessions inside their 25 as Miller blasted five of seven kickoffs into the end zone, with the other sailing out of bounds.

“We had tough field position all night long,” Upper Arlington coach Darrell Mayne said. “We started deep in our end and that’s not a good situation for us to be in.”

With Upper Arlington quarterback Andy Means out with a broken jaw sustained in practice Thursday. Anderson was harassed all game by the Davidson defense, finishing 9 of 21 for 126 yards and the costly interception.

Miller also hauled in a 43-yard touchdown pass from Zack Griffith in the second quarter for a 14-6 Davidson lead.

Then Haywood took over, scoring on a second-quarter touchdown run of 79 yards before adding third-quarter TD runs of 24 and 5 yards.

“The line was terrific, everyone blocked their assignments,” Haywood said. “The defense overpursued on the long run, but we knew the lanes would be there all night because they put eight in the box.”
Powered by