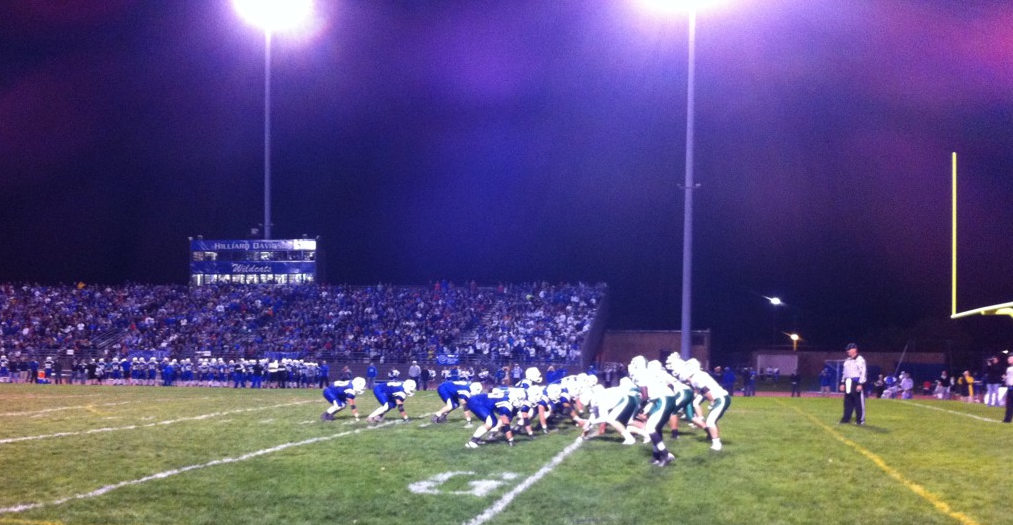 
Alex Mickley left, Alex Mickley right and, mostly, Alex Mickley up the middle proved to be a predictable but effective way for Hilliard Davidson to keep Dublin Coffman’s potent offense off the field.

“I feel really good now,” Mickley said, “but we’ll see how sore I am in the morning. Field position is so important in our scheme; we wanted to pound it at them all night and control the ball.”

Mickley’s consistent between-the-tackles running could have earned him the team’s defensive MVP as well. The lopsided time of possession played to Davidson’s strength.

“We usually mix it up more, but our second-leading rusher (E.J. Jennings) was out injured tonight, and we had to lean on Alex a little more than usual as our I-back,” Davidson coach Brian White said. “We were obviously very basic in our game plan, and we felt we would run between the tackles. Alex, he was just a warrior tonight.”

The Wildcats (7-0, 5-0) held their own on defense, limiting a diverse Coffman offense that had been scoring 39 points per game to 150 total yards and eight first downs. It was the fourth shutout for Davidson.

“I’ve got to give a lot of credit to Davidson’s defense,” Shamrocks coach Mark Crabtree said. “ To throw on them, we knew we had to establish some sort of running game to keep them honest, and they really stopped our run. They’ve stopped everybody all year, and we were no different.”

Wildcats senior linebacker Jake Himmeger said the defense expected Coffman (7-1, 4-1) to air it out. “We were preparing for that, but we stayed at home and respected their run as well,” he said.

The halftime score was 0-0.

Coffman’s Mark Kendrick took the second-half kickoff 49 yards into Davidson territory. On fourth-and-inches at the 22, the Shamrocks were penalized for delay of game. They were unable to convert.

On Coffman’s next series, quarterback James Walsh and running back Bilal Williamson mishandled the exchange and Davidson’s Michael Wilt recovered the fumble at the Shamrocks 31.

“That was the big opportunity we were waiting for,” Wilt said. “That gave us the field position we needed.”

Six plays later, Mickley plowed in from the 1 to end the scoring drought.

Early in the fourth quarter, Mickley was stuffed on fourth-and-2 at the Coffman 5. White passed up an easy field goal that would have made it a two-score game.

The stop, however, led to a 10-yard punt by Tyler Low that put Davidson back in business at the Coffman 24. Tyler Talbott capped the short drive with an 8-yard touchdown run with 2:43 remaining, pushing the lead to 14-0.

“That was our first real test this season, and I’m proud of the way the kids pulled through it,” White said.

Davidson has won four of the past five meetings against Coffman, three of which occurred when both teams were undefeated.

“I told you coming in that the team that didn’t make mistakes was going to win, and that’s what happened,” Crabtree said. “We just didn’t make enough plays on offense to keep the field position in our favor.” 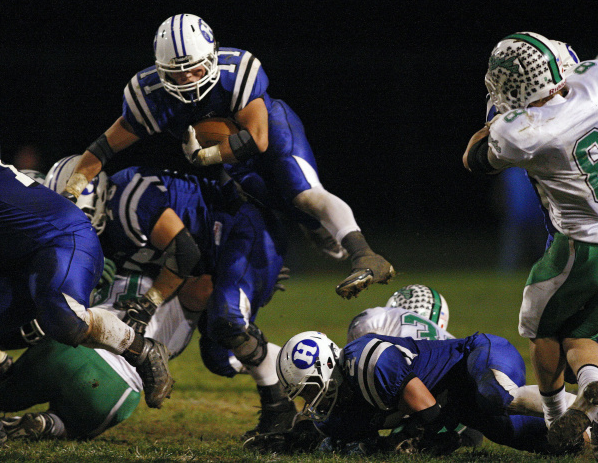 Mickley carries the load as Wildcats knock off Shamrocks

Alex Mickley was only doing what he was told to do.

The senior running back for the Hilliard Davidson High School football team knew he was going to be the workhorse on offense on Friday, Oct. 14, against Dublin Coffman.

But the 5-foot-9, 189-pounder took that duty to the extreme by carrying the ball 48 times for 177 yards and a touchdown in a 14-0 victory to help the Wildcats gain an edge in the OCC-Central Division.

“They said I was going to carry the ball a lot, and I just tried to do what I needed to do,” Mickley said. “I really didn’t do much other than follow the blocks of the linemen. They were opening things up for us.”

Davidson, which was fifth in the Division I state poll, improved to 7-0 overall and 5-0 in league play. The Shamrocks, who were ranked eighth in Division I, dropped to 7-1 and 4-1.

“I knew he was going to be carrying the ball a lot since our other fullback (E.J. Jennings) was out with a leg injury,” Davidson coach Brian White said. “We had Sam Coles fill in and we thought that gave us two good downhill runners. I figure (Alex) will be a little sore in the morning, but I don’t think he’ll care that much.”

The teams were scoreless at halftime. Coffman’s Mark Kendrick returned the second-half kickoff to the Davidson 45-yard line and the Shamrocks drove to the 22.

On fourth-and-inches, Coffman was called for delay of game to move the ball back to the 27. Quarterback James Walsh’s pass attempt to Marcus Davis fell incomplete and the visitors didn’t enter Davidson territory again until the game’s final minute.

“They were driving and that delay of game on the fourth-down play hurt,” White said. “We don’t know what happened other than that fourth-and-5 looks much better defensively than fourth-and-inches. We’ll take it, though.”

“We took too long to get the ball snapped and that took away a lot of momentum,” Coffman coach Mark Crabrtree said. “You have to give a lot of credit to Davidson. They stopped us. They took away our running game like they have done to teams all season long.”

Coffman had 47 yards on the ground in 23 attempts. Davidson had 268 yards rushing on 60 carries.

Both of the Wildcats’ touchdowns came on short-field drives.

A muffed handoff between Walsh and running back Bilal Williamson resulted in a fumble recovered by Davidson’s Michael Wilt at the Shamrocks’ 31 with 8 minutes, 9 seconds left in the third quarter. Six plays later -- actually six Mickley runs later -- the Wildcats had the decisive score on a 1-yard dive.

Davidson converted a shanked punt by Tyler Lowe into a score. Lowe, who had a 71-yard punt in the first quarter, had a 12-yarder that went out of bounds at the Coffman 26. Mickley had five runs before Tyler Talbott rushed in from 7 yards with 2:13 to play.

“I told the kids at halftime that it was going to be a one-score game and it turned out that way,” Crabtree said. “They scored late, but this wasn’t a 14-0 game. We just didn’t take advantage of our opportunities and we made more mistakes than they did.”

Davidson quarterback Brandon Gleim rushed five times for 23 yards and attempted one pass, which was intercepted by Davis. Talbott ran four times for 30 yards and a touchdown.

Walsh was 12 of 24 passing for 108 yards and he rushed for 17 yards on six carries. Williamson ran for 32 yards on 15 carries. Davis had six catches for 55 yards and Austin Knisley had four receptions for 26 yards.