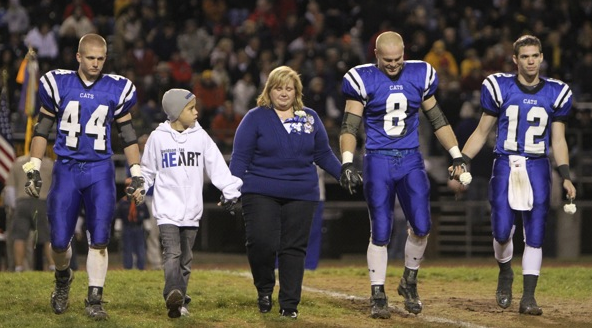 
It was the ninth week of the regular season, but the game between Hilliard Davidson and Upper Arlington had the feel, look and even sound of the playoffs.

When the thudding and smacking of the pads and helmets ceased, the Wildcats walked off the field winners because of their punt coverage team and a rare trick play.

Davidson got a safety and two touchdowns in the final nine minutes to earn a 25-7 victory over Upper Arlington in an Ohio Capital Conference Central Division game last night before a full house in Hilliard.

“You don’t know how physical you are until you play a physical team,” Wildcats coach Brian White said. “With all the great skill players they have, we thought we had to be more physical. It was kind of a prelude to the playoffs.”

Davidson (8-0, 6-0) earned at least a share of the division championship and probably secured a home game for the first round of the Division I playoffs.

As usual, tailback Alex Mickley was the fulcrum of the offense with 175 yards on 34 carries. But the game turned when the Wildcats downed a punt at the Upper Arlington 1-yard line with 9:13 left in the fourth quarter.

On the Bears’ first play, linebacker Ian Losey tackled Gus Ackley for a safety and a 12-7 lead.

“I thought that was the play of the game,” Upper Arlington coach Mike Golden said.

Davidson was thinking huge momentum swing when it took possession at the Bears’ 39-yard line on the ensuing free kick.

Four plays later, the big play happened in an unlikely manner when running back Tyler Talbot took a pitch from quarterback Brandon Gleim and threw a 23-yard touchdown pass to Nick Waters.

The players talked White into the team’s 12th pass of the season.

“We’ve been working on that play for two years,” Talbot said. “UA’s cornerbacks were doing well flying up on our (running backs) and we thought that pass was there. I was so scared. I didn’t want to overthrow it. I thought I put it up there too high.”

The pass was on Waters’ numbers and no defender was within 20 yards of him.

Davidson closed the scoring when Talbot ran 8 yards for a touchdown with 1:54 left.

The Wildcats also played strong defense. Lineman Dylan Skaggs had four of the team’s six sacks. There were five other tackles for losses or no yards.

“In the first half, we weren’t getting much pressure up the middle, so I thought I had to do my part,” Skaggs said. “You have to be more physical (than the other team).”

Upper Arlington (7-2, 5-1) had won seven straight games since an opening loss to Tri-Valley. Now, the Bears might have to defeat Dublin Coffman and count computer points to get into the playoffs.

“(Davidson) is a team where you can’t have any letdowns at all,” Golden said. “When you are one-dimensional in high school, college or pro, it’s tough. They took away our running game.” 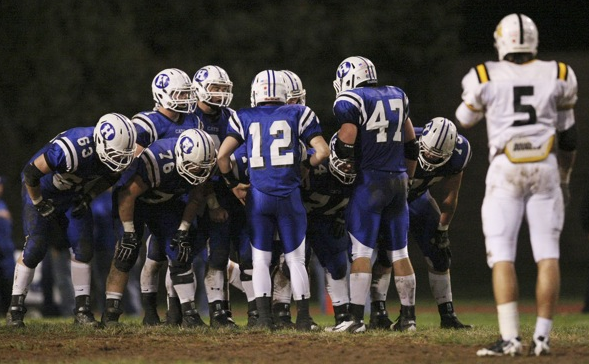 The Wildcats improved to 8-0 overall and 6-0 in the OCC-Central Division and will look to secure the league title outright when it visits Hilliard Darby on Oct. 28. UA fell to 7-2 and 5-1 and will close out the regular season Oct. 28 at home against Dublin Coffman.

With Davidson clinging to a 10-7 lead early in the fourth quarter, the Wildcats’ special teams turned in a key play to help regain momentum, as Sean Neimeister downed Tyler Talbott’s punt at the UA 1-yard line.

On the next play, Davidson linebacker Ian Losey tackled UA running back Gus Ackley in the end zone for a safety, giving the Wildcats a 12-7 lead with 9 minutes, 9 seconds remaining.

The Wildcats took over in UA territory on the following possession and used a gimmick play to add to their lead, as Talbott connected with Nick Waters on a 23-yard touchdown pass on a halfback option with 7:24 left.

Talbott closed the scoring with an 8-yard touchdown run with 1:54 remaining.

“The defense did a great job tonight,” Davidson coach Brian White said. “The offense just kept plugging away the way we do. The big play was the punt down to the 1-yard line. You saw a little bit of poise not to screw it up and let it go in the end zone. They had some momentum and momentum is a hard thing to get back once you’ve lost it. They had momentum and that was a big turning point.”

The Wildcats used their conventional game plan to open the scoring on the game’s first possession, as quarterback Brandon Gleim capped a 16-play, 80-yard drive with a 1-yard run with 4:17 left in the first quarter. Davidson converted two fourth-down plays on the drive, including Alex Mickley’s 2-yard run on a fake punt at the UA 33.

The Wildcats used an effective two-minute offense to add to their lead before halftime. Jack Johns’ 22-yard field goal as time expired capped a 12-play, 67-yard drive to put Davidson ahead 10-0.

After being limited to minus-13 yards rushing and one first down in the first half, UA used a big play in the second half to help pull within 10-7.

Quarterback David Smith’s 41-yard pass to Garrett Powers gave the Golden Bears a first down at the Davidson 17 and five plays later Zach Powers pounced on an Ackley fumble in the end zone with 5:10 remaining in the third quarter.

Davidson, however, did not allow a first down the rest of the way and had five of its six sacks in the final 13 minutes, with linebacker Dylan Skaggs having a hand in five of the sacks.

UA finished with minus-32 yards rushing.

“We definitely had to take over, especially after giving up that score,” Skaggs said of the defense. “We had to step up and help out the offense. Our philosophy is if they can’t score, they can’t win. Obviously, we gave up a score, but that’s what we try to do every day.”

Mickley rushed for 163 yards on 33 carries and Talbott added 66 yards on 14 carries.

“It was a great game for a while, but it’s a team that you just can’t have any letdowns against at all,” UA coach Mike Golden said. “Once we got down a little bit, we have to respond better than that. We have to let it go.

“We don’t have time to cry about (the loss) because we have to get ready for next week and play our best. We’re capable of playing better than this. You have to give them all the credit. It’s a great football team, a great defensive team and that puts so much pressure on you because their defense is so good.”